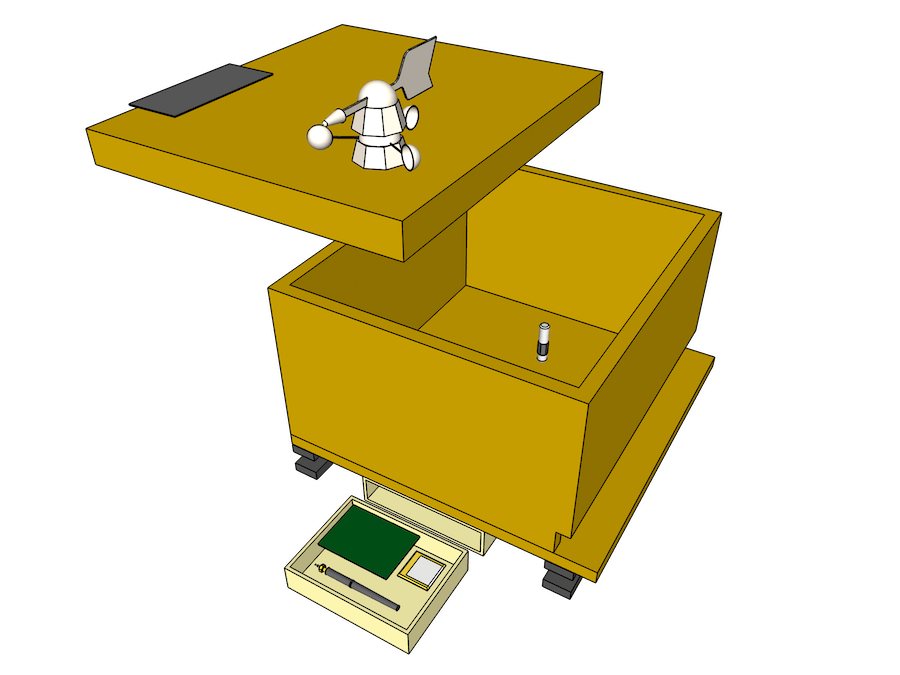 Traditional beekeepers usually have to go to the hives frequently to obtain the status of the bee colony:

Our professor at Sorbonne University, Mr. DOUZE, is an amateur beekeeper. Since the hives are far away from his home, he suffers from frequent travel between his home and his beehive. In order to save the time and energy of beekeepers so that they can get information and alerts about beehives and bee colonies without leaving home, we created the connected beehive that meets the following needs：

We implement all sensors through “mbed”. You can view the complete code in the attachment.

It can also detect the speed of the wind by counting the number of turns in 1 second.

We weigh the beehive in the school and subtract its weight from the value obtained by the weight sensor to get the net weight. This process is implemented in the code.

We use a voltage divider to calibrate the battery percentage.

Table of correspondences after the voltage divider

Obtaining beehive information is only the first step. What is more important is to judge the health and activity status of the bee colony based on the obtained data, and notify the beekeeper when an abnormality occurs. To this end, we have done a lot of research to ensure that our smart beehive can make correct warnings based on the data obtained by the sensors. Of course, an experienced beekeeper can also set the trigger conditions for the warning according to his own needs.

The sound research took the longest time. We read many papers, tried to find the relationship between different activities and sound frequencies, and produced the following table:

We set up alerts in ubidots based on the above table (mentioned below). Since these are summarized based on published papers, we will verify whether the behavior and sound frequency correspond in actual use, and fine-tune and optimize the trigger conditions in the later stage.

Humidity of the brood nest is important for the overall fitness of a honeybee colony. Numerous studies have demonstrated that either high or low levels of humidity affect the health of the brood and adult bees, either directly, for example at levels below 50% relative humidity in the brood cells no eggs hatch (Doull 1976), this being particularly relevant for small nuclei, or indirectly by favouring the development of pathologies.

Beekeepers are most concerned about the production of honey. Through the weight, we can know how much honey the bee colony produces and how much the colony expands.

Wind speed has a lot of influence on bees. If the wind is strong, it may cause the flowers and branches of nectar plants to collide, cause damage to the flowers, and damage the source of honey. In addition, strong winds will speed up the drying of nectar, which make it harder for bees to collect nectar. The lack of honey sources for bees will naturally affect honey production, not to mention the windy weather itself will affect the flight of bees.

The acceleration sensor is directly plugged into the PCB board to detect whether the beehive is overturned or moved or stolen by humans.

In order to transmit the data of the connected beehive to the client in real time while ensuring low power consumption, we use sigfox.

Sigfox is a French global network operator founded in 2010 that builds wireless networks to connect low-power objects such as electricity meters and smartwatches, which need to be continuously on and emitting small amounts of data.The existing standard for Sigfox communications supports up to 140 uplink messages a day, each of which can carry a payload of 12 octets at a data rate of up to 100 bits per second.

We use the BRKWS01 module from WISOL which allows messages to be sent over the Sigfox network. Since the amount of data that can be transmitted through LPWAN is small, and we have a lot of data to transmit, we choose different accuracy for them according to the importance of the data.

We optimized the data transmission, 9 data only uses 6 bytes to transmit, which saves bandwidth and reduces power consumption. The connected beehive sends data every 15 minutes.

We implement the user interface through the ubidots platform.

We think beekeepers are the most concerned about honey production, so we put weight in the middle. To its left is the battery status and to its right is our own wind direction and speed widget written in HTML / CSS / JavaScript.

The third line concerns the information in the hive, the fourth line illustrates the information outside the hive. The temperature is to the left of these two lines, represented by the yellow lines. The humidity on the right is indicated by the blue lines.

In the event interface, we set up alerts based on the data conditions mentioned above (Data Analysis). The alert function in ubidots is customizable, users can also create alerts at will and according to their needs.

The method of creating an alert is very simple and efficient. All you have to do is define a trigger condition. For example, in this figure, when the temperature measured by the DS18B20 is less than 22 degrees, the alert will be sent.

You can also choose to send the alerts by email or sms.

All alerts and trigger conditions are shown here

The beekeeper logs in to his ubidots account and can view all the information of the beehive in real time.

We use the device "Analog Discovery 2" and the software "WaveForm" to visualize the power consumption of the prototype.

After connecting as shown above, we can see the following waveform in “WaveForm”, average consumption is 6mA/h. This means that it can work for a week without charging the battery.

We add a deepsleep mode.

Average consumption is 1mA/h after optimization. This means that it can work for a month without charging the battery.

We completed the PCB design using kicad software with the help of the video tutorial of youtube blogger Eric Peronnin and the help of our teacher Viateur.

Since most of the components we use are not in the kicad library, we created a library of our own, named Stonks.lib, and completed the electrical diagrams of the components (for example: Sigfox module, acceleration sensor MMA8452, Nucleo- L432KC, the wind vane etc).

Electrical diagram of the prototype

Similarly, when designing the layout diagram, some component libraries can be found on the Internet, such as LM386 and module Audio, but some components need to be created by ourselves, such as carte Nucleo. Here is the final layout:

After printing out our pcb, we replaced the breadboard with our PCB board and tested it.

Prototype with PCB, battery, antenna in a box

We conducted field tests at Apiary School De Plaisir, located on the west side of Paris. Here is a group photo of the team members with the connected beehive (from left to right are Fadi Shehadeh, Alexandra Deac, Yongtao Wei (the one in the phone), Amélie Kirady and Ismail Bennis.

Here is the box contained with PCB, antenna and battery:

Overview of the device integrated into the hive:

On the delivery date of the project, we had an in-depth exchange with the beekeepers at Sorbonne University. We introduced our project to them and taught them how to use it. In the end, we delivered our project "Connected Beehives" to them. This is a group photo of our team (from right to left: Alexandra Deac, Amélie Kirady, Yongtao Wei, Fadi Shehadeh and Ismail Bennis), beekeeper Jacky Boisseau (first from left) and our professor Yann Douze (second from left).