For this project, I used LabVIEW to create a Raspberry Pi controlled Sumobot.

For this project, I used LabVIEW to create a Raspberry Pi controlled Sumobot. 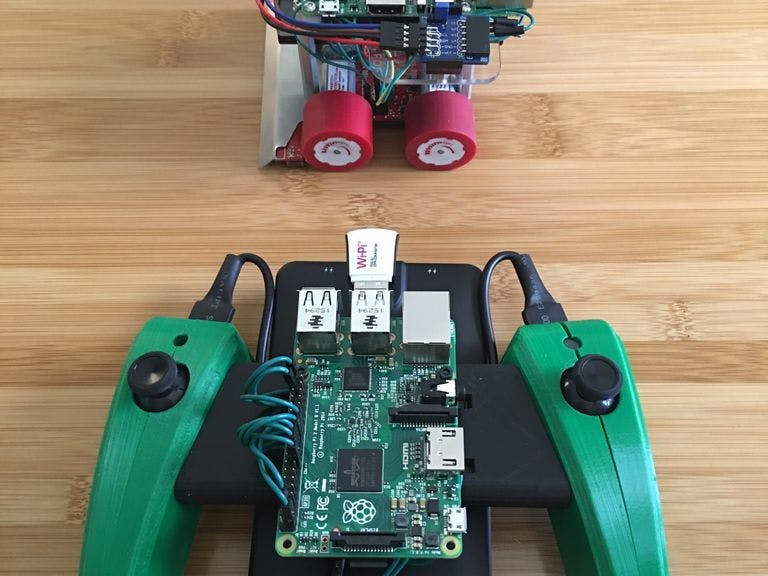 For this project, I used LabVIEW to create a Raspberry Pi controlled Sumobot. I also made a 2 joystick, 2 trigger controller that is also powered by a Raspberry Pi and can control the Sumobot over WiFi. This bot is going to be used to compete against its BeagleBone Black counterpart to see which robot can stay in the ring the longest. The LabVIEW VI for the BeagleBone Black and Raspberry Pi 2 is attached in the last step, LabVIEW 2014 and Linx 3.0 are required to run this code. Below are some related tutorials:

Step 2: Mounting the Raspberry Pi to the Fingertech COBRA Minisumo

Go to this link for an tutorial detailing the setup of the Cobra Minisumo. Once you have followed those instructions the next step is mount the Raspberry Pi. I used a laser cutter to cut out a plexiglass stand that would allow the Raspberry Pi to attach to the spacers.

Go to this link to watch a video with instructions on how to set up the Raspberry Pi 2 as a LabVIEW target using LINX.

The 3D printable files for the Controller are attached. you will need to print 2 of the "Single Joystick", one for each side of the controller.

The Raspberry Pi 2 only has one set of MOSI, MISO and CLK pins so you will need to find a way to split the wire two ways. I did this by soldering a single header pin to a pair of header pins (picture shown above).

Once you have the controller printed you will mount the Raspberry Pi 2 to the center and insert a Pmod JSTK 2 into each side. Once you have it assembled you will connect both of the 6 pin sides of the 2x6 Pin to Dual 6-pin Cable to each of the Pmod JSTK's making sure that the symbol is facing backward. You will then need to connect the CS, MOSI, MISO, SCK, Ground and VCC (Pin out diagram). Using a 2x6 Pin to Dual 6-pin cable to to connect the wires to each PmodJSTK 2.

Once you have deployed both VI's onto your Raspberry Pi 2's you will see that there are 2 modes. The regular mode allows you to control the Sumobot with the controller over WiFi. The Sumobot controller uses tank drive, so each joystick controls one of the motors, the farther you push the controller forward or backwards the faster the Sumobot will go. You can also press the triggers to spin the robot in place, right trigger spins to the right and left trigger spins it to the left. The robots will automatically stop when the see white and you will have to move them off of the white and then pull both triggers at once to restart them.

You can switch to this mode by clicking the "auto" switch. This will cause the Sumobot to move in any direction at an adjustable speed until one of its front sensors sees white. Once the Sumobot sees white it will turn until the front sensors no longer see white. You can also switch in and out of autonomous mode by pressing down both of the joysticks at once.

For an in-depth explanation of the Sumobot code check out my tutorial Sumobot (LabVIEW Code). Also check out PmodJSTK 2 controller LabVIEW code for an explanation of the controller code. The LabVIEW code for the BeagleBone Black and the Raspberry Pi 2 is attached below. Thank you for reading my tutorial, please comment with any questions you may have.

16 projects • 33 followers
I work as a Product Marketing Engineer at NI. In my free time, I love tinkering and finding creative ways to solve everyday problems.
ContactContact