We finished the Cobra MiniSumo chassis build in part 1 of this project. Let's add some brain power this time.

We finished the Cobra MiniSumo chassis build in part 1 of this project. Let's add some brain power this time. 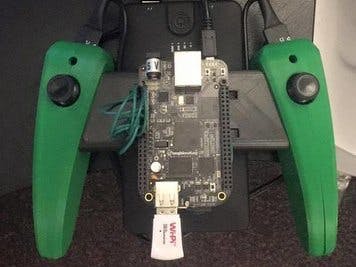 We finished the Cobra MiniSumo chassis build in part 1 of this project. In order to control the bot and give it a little brain power, we sought out a BeagleBone Black.

The overall goal of this project was to make two robots with two controllers - one pair using the BeagleBone Black and one pair using the Raspberry Pi. We have a sumo-ring where the robots "fight", and when a bot gets knocked out of the ring, the game is over. There's a manual control mode where you can run them around yourself - and a autonomous mode where they trace the outside of the sumo ring.

We moved the steel plate to underneath the bot for extra weight. We laser cut a piece of acrylic to fit as a mount for the BeagleBone so it can sit above the bot.

Mounting your BBB to any kind of plate above the board is pretty simple. We added four extra standoffs to allow for a little more space between the BeagleBone and the robot board, and four more on the top side of our acrylic plate to keep the BBB from resting directly on it.

The wiring portion is fairly extensive. In addition to the BeagleBone, we have two Pmods mounted on the bot. We use the Pmod AD2 to convert the analog signals from the sensors on the robot to digital values we can send through the BBB and eventually to LabVIEW.

The sensors on the robot only sense the colors white and black. The analog output reads ~1.7 V when sensing black and ~2.5 V when sensing white. The BeagleBone Black analog inputs have a maximum voltage reading of 1.8 V, so in order to read from the analog inputs on the board we need to step down the voltage. Using two resistors and a simple circuit (pictured above), we ran the voltage across both resistors and the SDA and SCL inputs from the Pmod AD2 across only one resister. This made it possible for us to read the analog inputs from the robot itself without killing our BeagleBone.

The AD2 has four analog inputs but in our case we only need three (because we only have three sensors). On the bot, there are three rows of inputs, each labeled PWM, DIR, W, R, and B (or some variation of these). The input labeled "R" is our analog, sensor input. Wire each analog output on the bot directly to one input on the AD2. The VCC on the connects to 3.3 V on the board.

The Pmod VLSHFT or the logic level shifter is mounted opposite of the AD2. The voltage is supplied by the BBB and goes into the 3.3 V input in Header J1 on the VLSHFT. Pin 1 and 2 in Header J1 go to DIO 7 and DIO 8 on P8 on the BBB.

In order to control the bots, we built the controllers from scratch. The handles and midsection are completely 3D printed.

Our goal was to use LabVIEW for the entire project. You have to begin by loading LabVIEW onto both BeagleBone Blacks. There's a great batch of tutorials on LabVIEW Makerhub that walk you through how to do this. The BeagleBone Black's wifi is not an automatic plug-and-play either, so make sure to get wifi setup on both boards. Follow this tutorial to learn more about setting up wifi - we used PuTTY to SSH into the board and the wifi is solid.

The LabVIEW program is fairly extensive. We use UDP to communicate between the two boards over our router. As I mentioned before, the sensors output different voltages depending on whether or not they sense white or black.

Our sumo-ring is black with a white outline, so we have our motors shut off when any of the three sensors see white and output a voltage about 2 V. In order to re-set the game, we allow the bot to just be simply placed back into the ring, and pulling both triggers on the controller will re-set the bot.

When the bot senses any white while in autonomous mode, it'll turn until none of the sensors output above 2 V and drive straight until it hits white again.

We took our bots to NI Week and we had our sumo ring in the LabVIEW pavilion.

The sumo ring is pictured above - with a black center and white boarder. The two bots fought hard and there were many casualties, but they worked really well and they were a lot of fun to drive.