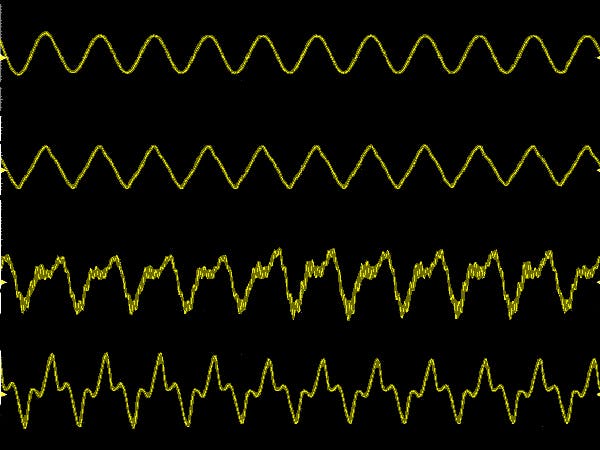 Synthesis of the sound has a long history and different methods of synthesis were developed. The most common method is called subtractive : basic waveforms are generated by the processor (wavetable synthesis) or analog components; then applied to filter and mixed to generate an output signal. Additive synthesis is more complex; it's based on Fourier transform.

Fourier Transform decomposes a function of time (a signal) into frequencies that make it up. Transform gives the coefficients of amplitude and phase shift. Every periodic signal can be described by a sum of sine waves with different frequency, amplitude, phase shift.

Additive synthesizer works by summing sine waves, which have frequencies based on input frequency (it's called pitch of the sound).

Additionally, a mobile phone with Bluetooth is needed to communicate with the system.

The focus of this project is to generate sounds in another way that is nowadays. Additive synthesis gives the possibility to create all existing shapes of a signal by its definition (Fourier series). Also, we can record FFT of the signal from a microphone and reproduce it by sine waves (after that, it's possible to edit single sine wave in signal!).

In the current stage, the peripherals (audio codec driver, Bluetooth) and processor architecture (DMA, memory, FFT) are fully completed and tested. The additive generator works in software (supported by Adder, Multiplier, Normalizer IPs and DDS Compiler IP) and is capable of generating signal containing up to 10 sine waves in real time.

Power-up your Nexys Video
Set JP2 jumper on BT2
Connect BT2 to the JA port of Nexys Video
Analog Discovery 2 connection - I used modified jack-RCA cable
RCA plug is cut off and gold pins are soldered to RCA cables, now we can interface with oscilloscope
Select "paired devices"
List of paired devices will appear - select BT2 module (RNBT)
If connection was successful, you will see main window of the application