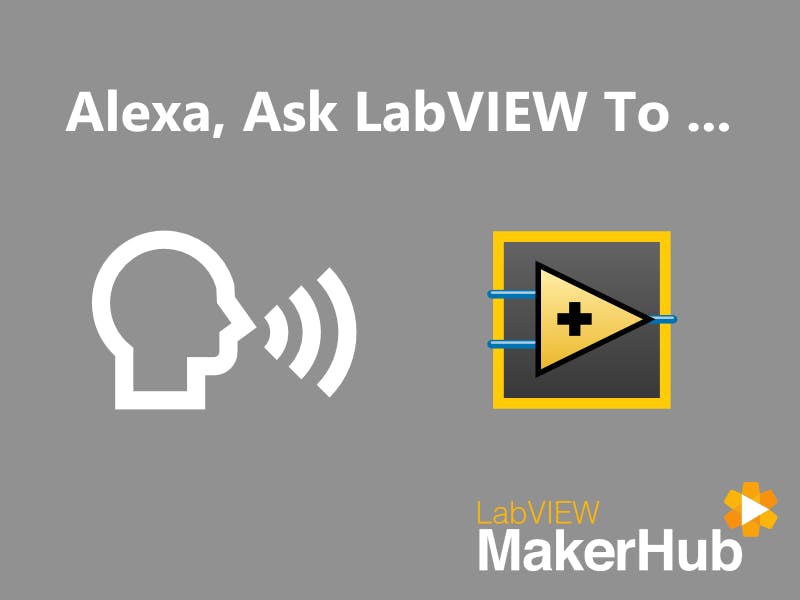 This project demonstrates how to configure the Amazon Echo to send voice commands to a LabVIEW application running on a Raspberry Pi 3.

The Amazon Echo routes all communication through Amazon's cloud services and therefore cannot communicate with the Raspberry Pi 3 directly. Using the Alexa Skills kit we can create an Alexa skill that will forward requests to our Raspberry Pi and route responses back to the Amazon Echo.

Note: The alexa/Web Resources/post.vi handles all incoming Alexa requests and can be updated later for custom applications.

The Alexa skill we create in the next section will send an HTTP POST to our Raspberry Pi using HTTPS. We need to route this HTTPS request to our HTTP LabVIEW Web Service. This is accomplished with a Node.js script.

The httpsHelper must remain running for Echo quests to be routed to LabVIEW.

Note: the httpsHelper is hard coded to listen on port 8123 and route to a LabVIEW Web Service running on port 8001.

Create an Alexa skill to send voice commands to LabVIEW.

A domain name is required for the Alexa Skill Kit. You can register a free .tk domain from dot.tk. Make sure the domain points to your public IP address (see your public IP at ipchicken.com).

The Alexa service sends an HTTP POST request on port 443. This is currently not configurable and most routers require port forwarding port 443 to the device running LabVIEW. Ensure port forwarding is setup correctly using canyouseeme.org.

At this point you should be able to send voice commands to a LabVIEW application running on the Raspberry Pi. You can process commands by parsing request strings in LabVIEW or by creating new utterances in the Alexa Skill.